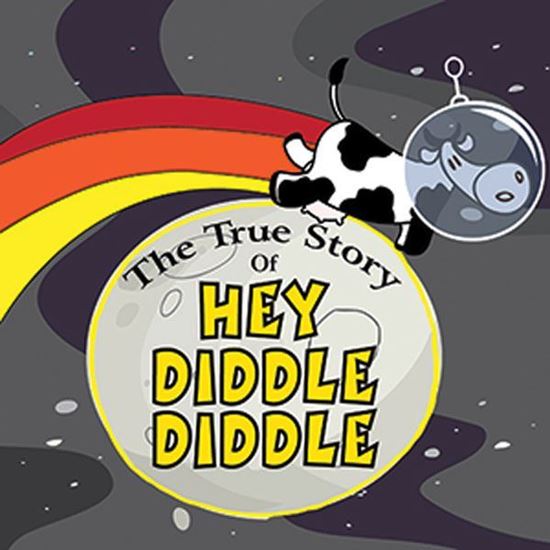 We all know the nursery rhyme "Hey Diddle Diddle," but when you stop to think about it...how can a cow jump over the moon? If a cat could play the fiddle, wouldn't it be all over the internet? Why is a dish running away with a spoon? What’s the little dog actually laughing at? And how do they all connect with each other? This family comedy offers seven different outlandish tales speculating about what might be “The True Story of Hey Diddle Diddle.” It has a completely gender-flexible cast of 9-46 actors and runs about 55 minutes in length. Its target audience is all ages, with various levels of humor aimed at children, teens, and adults.

A: I honestly can’t say for sure. The idea—a play composed of several short pieces, each focusing the different characters in the rhyme "Hey Diddle Diddle"—just popped into my head, seemingly out of nowhere one day. I was definitely in the living room at the time. I’m pretty sure I was vacuuming and it was a Sunday afternoon. If I was vacuuming in the living room, then I was probably vacuuming up cat litter. It’s possible my brain made a series of jumps from cat litter to there being a cat in "Hey Diddle Diddle" to the idea for the play. Or maybe not. The idea was just kind of there all of a sudden. And it seemed like a very good idea…one that would serve me well for the annual play I direct at the school where I work. And a little over a year later, it did.

A: I adore the spoon’s line, “Some nights, I lie awake for hours wondering what William Henry Harrison could’ve accomplished if he’d gotten to serve a full term as President, you know?” Harrison was President for one month in 1841. I can’t imagine anybody lying awake for hours thinking about him, so I think the spoon making this confession is hysterically funny. And then the spoon caps off the line with, “You know?” Like she just expects that there could possibly be anybody else in the world that does the exact same thing. But then the dish comes back with, “I do! I get exactly what you mean.” And it makes the bit even funnier, because it’s so mind-bogglingly unlikely. I love the layers of improbability stacked into that little two-line exchange.

My other favorite bit is Doctor Diddle Diddle revealing that he hopes to make the cow jump over the moon by injecting her with caffeine, Taurine, and recombinant bovine growth hormone. Caffeine and Taurine are ingredients in Red Bull, and combining those with recombinant bovine growth hormone to create the ultimate cow steroid is another joke that never gets old for me.

And of course, I love the line about the cow accidentally launching itself over the moon by eating baked beans and rocket fuel and jumping up and down on a trampoline.

A: Joyous absurdity combined with theatrical flexibility and simplicity. And for the most part, I’d say I was successful. When I staged the play, keeping track of the constant flow of props wound up being a bigger challenge than I expected, but the stage directions and property notes in the published version of the script should significantly ease that particular headache for future directors of the show.

A: I have to admit…if I hadn’t written this play myself and was seeing it performed for the first time, the William Henry Harrison joke would go completely over my head. I had to look him up while working on the script.