Melodrama meets the high seas when J. P. Morganfeller, mysterious millionaire, carries his priceless painting, the "Mona Lisa Unbuttoned," aboard ship. A villainous art thief and three lady cat burglars (thinly disguised as high society types) steal it and throw all the blame on officer Vance Trueblue, who must solve the case to keep his sterling reputation and his true love, Dimity Darling. About 40 minutes.


When payrolls are robbed from stagecoach runs miles apart four times in a row by a thief who smells nice, the folks in Gravestone start to wonder if something's amiss! Lovely heroine Lucy Lovelight thinks Rudolph Rumple could be involved. He's paymaster for the companies and owner of the town store/hotel/bar. Lately he's been burning his trash hourly and making a suspicious amount of smoke. Lucy's true love, Harold Hardluck, is back from another failed attempt at mining. To pay back all the money he owes Rudolph, Harold must dress as a dancing girl and work a...


Ma and Pa Culpepper are in danger of losing their livelihood - the Last Chance Inn - to Horace Prickley, a representative from the loan offices of Gimme, Gimme & Gimme. In need of a son or son-in-law, the Culpeppers scheme to adopt and marry off pretty (but clumsy) orphan-turned-waitress, Patience Sweetwater. The intended groom is the newly-appointed Sheriff Virgil St. Vigil, who makes the rounds with his deputy and trusted side-kick, Princess Prettyfoot. Prickley learns of the Culpeppers' plot and enlists the aid of the beautiful Sahara Hartburn to "dist...


Back by popular demand! All the beloved characters are present - the large awkward, wig-wearing heroine, Little Nell; tall, slinky mustachioed villain, Carlton Bainbridge; and the affable, lovable, but-oh-so-slow hero, Hector Skyscraper. Revolving around the heavy plot of "Marry-me-or-I'll-foreclose," you'll want to cry with the heroine, hiss the villain and applaud the hero. This play's a favorite with community groups. One hour (can be lengthened or shortened).


Villainous Bernard Blackburn is in debt up to his dark moustache, but he plans to wed innocent Polly Goodson to remedy that! She believes she is penniless, but actually her late father's insurance policy is very valuable. Blackburn is somewhat daunted when he meets Polly's eccentric family and disapproving maid, but he easily gets her boyfriend, John Trueheart, out of the picture by convincing him to go off to make his fortune before asking Polly for her hand in marriage. Luckily, Trueheart finds his fortune in a diamond mine and in a final blackout scene, ev...

She Was Only a Garbageman's Daughter


Even though lovely young Julia works hard, she and her aunt will not be able to afford to keep their humble home, which sits at the edge of a garbage dump. If they lose their home, they’ll also lose the treasure Julia’s papa buried somewhere on the property that would take care of all their needs. (Hero Dan would ask his parents for money to help Julia, but alas, he too is an orphan.) As they try yet again to figure out the special riddle to the treasure’s location, a German Mennonite detective appears on the case and is soon followed by two old ladies with l...

Mastermime (Or Don’t Mime if I Do)

Comedy by Katie B. Oberlander


Tomorrow is opening night at The Grand Old Theatre and Mastermime, a notorious criminal who distracts audiences with entrancing mime routines and then disappears with their valuables, has defaced the theatre marquee and is terrorizing the stagehands. Will hard-boiled detective Stanton Ovation and his earnest sidekick Deputy Hammet Upp capture this mute but expressive villain before he steals self-absorbed celebrity actress Ima Starr’s diamonds? Or is there more to this case than it seems? Ima’s talkative assistant Roberta, who was a forensic scientist before ...

Dastardly Deeds at Yoursin Mine -or- Yukon Take It With You


This great romantic melodrama of the Yukon Territory has it all! Come visit the world of Lester Lawless, Lotta Pidee, Loooney Yoursin, and many others including miners who can't find stakes, trappers who can't find pelts, and Mounties who can't find anyone as they weave a story of Wild West intrigue. Narrators and Sign Gals help dictate active audience involvement as villains are thwarted, heroes and heroines are blissfully united, enemies become friends, widowed matrons are reunited with lost children, and orphans live happily ever after. In addition to a co...


It is business as usual at the Mega-Bite Candy Company. Pop Tart is stirring the chocolate, Stretch is headed for the Taffy Room, Cookie the Clown is preparing to host a tour of young school children, Jan and Dean are experimenting with new flavors of candy, and--most significantly--Graham Cracker is looking for Kandy Kane. As Graham searches for Miss Kane and attempts to propose, Grimsley Krumkake, a dastardly villain posing as a vat inspector, enters with his dopey sidekick, Bink. Thus is set in motion a fiendish plan to take over the world, beginning with ...

In Search of the Holy Grill


An evil banker, Char Cole, wants the land the church sits on to build a casino. He sends a bogus mortgage bill demanding the church pay a $10,000 balloon payment to scare the congregation in to selling him the property for a fraction of what it is worth. Church members hurriedly decides to submit a secret barbecue recipe to a contest in hopes of winning the huge cash prize. They even open a barbecue restaurant in the church to raise money. Meanwhile, Miss Phit, the bumbling church secretary, is constantly getting the bulletins and newsletters wrong, sending m...

Last Gasp at the Last Gulp


Doc Robbins, a dentist with a heart of stone, rules the town of Last Gulp with an iron fist. Though folks treat Doc with due respect as their mayor and the only “medical” man in the territory, there’s no shortage of suspects when he dies following a swig of rat-poisoned sarsaparilla. Everybody, it seems, had it in for Doc. Bonnie Vivant wanted to turn her old saloon into a fancy restaurant, but Doc wouldn’t let her. Three old prospectors Crusty, Dusty, and Musty, all resented the fact that Doc had jumped their claims and wondered if he ever struck it rich. Af...

Showdown at the Hoedown 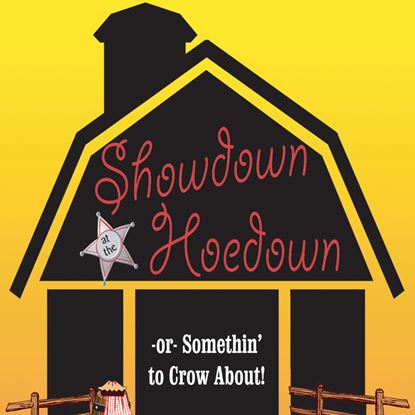 
It's the late 1890s, and the little town of Astaire, Wyoming, ready to enter the new century as the "Paris of the Plains," has just elected the first female sheriff west of the Mississippi! Daisy Dandelion vows to bring about law and order with just a law book and "good ol' female common sense." The mayor, who's always looking at the “big picture," and his town council are holding a hoedown in honor of Daisy, who loves to dance. But this celebration is tap-dancing with trouble! One young woman, in a burst of defiance against husbands ruling the roost, encoura...


Faced with losing the Last Chance Inn once again, Ma and Pa Culpepper turn to glamorous Sahara Hartburn. Sahara pays off their loan with money from a "well-heeled admirer" and promptly takes over the inn. Transformed into the Hartburn Hotel, the place becomes a residence for young ladies with a "no men allowed upstairs" policy. Sahara schemes to find a scandal that will give her new venture some publicity, and finds it when the new schoolteacher, Polly Sincere, is paid a visit by her dapper and devoted boyfriend, Jasper Jones - in her room! To escape, Jasper ...


The Culpeppers open the doors to the Last Chance Inn once again in this hilarious sequel to "Last Chance Inn, Calamity Gulch." Ma's just as harried, Pa's just as cantankerous, and Horace Prickley is just as villainous! This time he plots to woo and wed the woeful Widder Black and take control of her fortune. It seems, however, that Horace may have to share the money with the Widder's noble nephew, Peter Loveless...if the young man finds a bride before the week is out. Enter two likely prospects - Pansy Perriwinkle (the most annoyingly sweet heroine ever to gr...