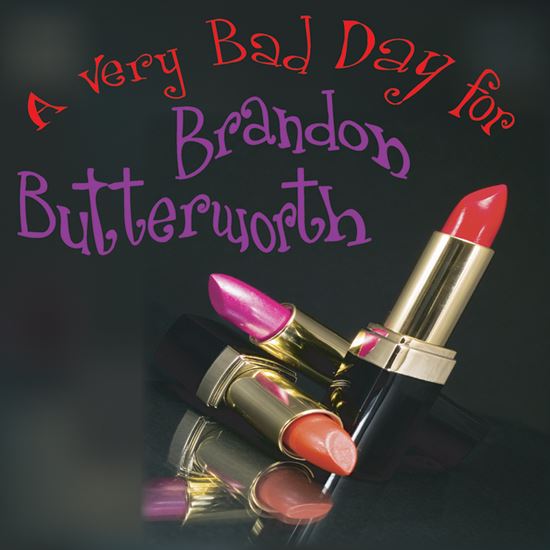 Brandon Butterworth has apparently been playing the field. On one fateful night, his multiple girlfriends (grouchy Lucy, ditzy Rebecca, and shy Constance) accidentally discover each other. The three ladies realize their boyfriends, all named Brandon, are actually the same guy. Instead of fighting and bickering amongst themselves, they hatch a plan for revenge, teaming up to teach the three-timer a lesson. Brandon is about to have a very bad day, indeed ... unless his own plan works! A sarcastic bartender and a biker-type customer round out the cast.

TALKS ABOUT “A VERY BAD DAY FOR BRANDON BUTTERWORTH”

A: Believe it or not, I owe a debt of gratitude to Carrie Underwood. Her song “Before He Cheats, which was playing on the radio roughly every 22 seconds, is about a woman who unleashes her fury against a man who is “probably” (?) cheating on her. Seemingly based on suspicion instead of actual proof, she grabs a Louisville Slugger and vents her rage through violent property damage. Hell hath no fury like a woman scorned, all right! However, there are two sides to every story, so I wondered…what was HIS? That thought gave me the kernel of an idea that evolved into this play.

Q: WHAT’S YOUR FAVORITE PART OR LINE IN THE PLAY? WHY?

A: “Are you saying I’m fat?” It’s the second line of the play. The actress who played Lucy in our premiere production nailed this line beautifully, and the crowd responded with a huge laugh. When you can hook an audience within 3 seconds of the curtain rising, you know you’re on the right track. (Thanks, Beth!)

A: Accepting that this was a one act. When I first began writing, my intention was to create a full-length play. However, the first draft was too short to be full-length, but too long for a one act. Furthermore, I realized I couldn’t logistically expand the story. Because of the nature of the charade being perpetrated, I was extremely limited in which characters could even be left alone onstage together without talking candidly and revealing the twist to the audience. So I decided to remove two characters (namely Brandon’s parents), simplify the story a bit, and tighten it down into a one act instead, and I’m very happy with the final result.

A: My goal, quite simply, was to make an audience laugh, and to hit ‘em with a surprise or two. That was accomplished on the night of the first production here in my hometown, so everything beyond that is icing on the cake. Nothing would make me happier than for more audiences to enjoy this story and to laugh along with us.

A: Thank you for showing an interest in this play – whether you watch it, read it, or help bring it to life, I hope you enjoy yourself! Oh, yes…and thank you, Carrie Underwood!