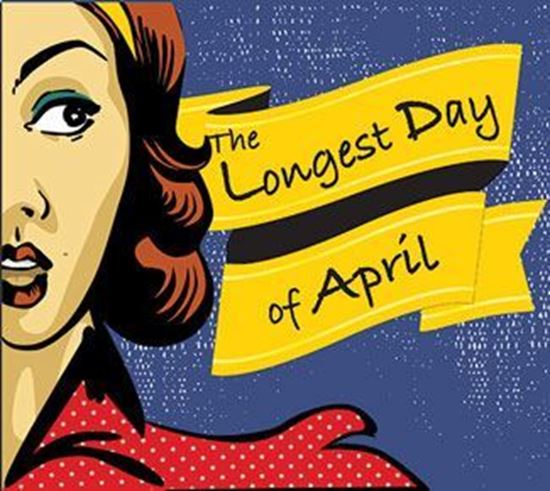 The Longest Day of April

When Max Holsten sets out for work leaving behind his briefcase and an unfinished breakfast, his quaint 1950s family is besieged by a series of misunderstandings that fester into conspiracy theories and suspicions. The extended family Max and his newlywed wife, April, have been living with are no comfort. April’s sister June has an obsession with pulp-fiction intrigue and leads April to assume the worst about Max. Making matters murkier, Grandma May, the aged and easily confused matriarch of the family, misstates all the facts. Max’s seemingly simple oversight is quickly compounded with a set of uncanny coincidences, leading to the inescapable conclusion that Max is living a double life with a secret family. A perfect storm brews with the arrival of June’s gossip-loving book club. Have they read too many mysteries, or is Max perhaps dead in a nearby subway accident?  Or is he in the mob?  What’s with the milkman locked in the coat closet? The play is full of action and misconstrued circumstances that show what can happen when we believe the worst!  The cast includes more zany characters: there’s Augustus, who hasn’t spoken a word in years; June’s husband Oswald, who lives to embarrass their easily embarrassed teen daughters; poor William, a young, terrified boyfriend; and the practical nurse Millie. The audience will be rolling in laughter until the final gag. Running time: 85 minutes.

"The Longest Day in April"

I wanted a farce, but most farces top off at thirteen characters. I wanted a play that adhered to a realistic timeline and plot development instead of something episodic or concept driven. I wanted something that felt nostalgic and old fashioned. The idea of two strong female leads who are left to obsess over the whereabouts of April's husband when it is discovered that he didn't show up for work quickly expanded into a web of subplots spinning all under the same -overcrowded roof.

My favorite part in the play is the subtle shifts each character makes as they start to get pulled into the conspiracy theories of June. As the play progresses, a web of seemingly inconsequential clues lead even the most skeptical to believe the worst.

The characters in this play are original, and each positioned to act in concert or opposition to the others. April is down to earth; June flies on fancy, and Oswald is the put-upon husband who endures June's paranoia before becoming drawn in himself. The foggy-minded grandmother often has all the information, but relays it pieces keeping the chaos going.

This play was written to satisfy the need for a large cast comedy with challenging, relatable roles. Directors looking for something funny but not silly or absurd will enjoy this script. The plot complications derive from a simple misunderstanding that billows out of control as happenstance and coincidence lead the protagonists to assume the worst. The story takes place on one long day full of surprise visitors, sneaking suspicions, and outright overreactions. Watch as even the most grounded characters get drawn in to the madness of "The Longest Day of April."

The script calls for a cello-playing character, but the actor need not know how to play. While the instrument is necessary as a prop, he only actually plays music on the cello when offstage which can be easily played by recording.