MATT STEELE (Left photo) is a Los Angeles-based actor and writer who has been performing from a very early age. He began acting in a self-constructed theatre he built in his basement. For years, he and his older brother, performed, directed, and designed high-quality productions - at least as high quality as theatre can be with no budget, two actors, and curtains made from bedsheets. Matt performed with community theatre companies and in his high school plays before attending New York University as a Drama major at the prestigious Tisch School of the Arts. There, he studied musical theatre under CAP21 and acting for the screen with Stonestreet Studios. Since graduation, Matt's acting work has been seen on screens, both large and small, and he has performed in theaters across the US, ranging from the grand Town Hall in NYC to the most intimate of performing spaces. He recently garnered international media acclaim for his original web series, "The Doomsday Diaries," for which he was reviewed in various publications and social media outlets, including The Huffington Post and the Village Voice. His performances in his school plays, however, will always remain his favorite memories as an actor. It's these memories that have given him a passion for writing for young performers. For more information, visit www.mattsteeleonline.com.

MIKE STEELE (Right photo) has been writing and directing from far back as he can remember. His life in the theatre began at the age of five when he gathered old bedsheets and constructed a stage in his basement so that he could direct a production of Snow White and the Two Dwarfs. Mike could not round up enough friends to cast seven dwarfs, so his adaptation had to be slightly non-traditional. His childhood weekends consisted mostly of forcing his friends and family to watch his original basement plays. Mike spent the bulk of his teenage years performing in school and community theatre productions and continued to act through college while he completed a BS in elementary education and sociology. Shortly before earning his degree, a local high school asked Mike to direct a play for a small group of students. The gig continued through the next year, and then the next, and he hasn't looked back since. Mike soon began to write full length plays and found ways to incorporate his students into the creative process. This evolved into what he now refers to as his cooperative drama program. Mike continues to direct school and community theatre productions and has taught cooperative drama workshops to a variety of students throughout the years - from elementary schoolers to senior citizens - as near as his hometown of Trenton, New Jersey, to as far as Bangkok, Thailand. He is happy to have found a way to combine his love of theatre and his passion for education. In Mike's spare time he enjoys exploring new places, watching television and films, and pretending like he knows how to play tennis. For more information, visit www.mikesteeleonline.com. 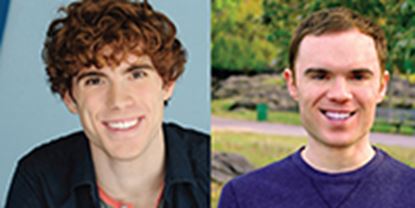 
Flashback to 1955, the stormy evening before the 33rd annual Knotting Bake-Off, brought to you by J & J Toothpaste. The contestants have gathered at the Knotting Inn down at the Jersey Shore, each hoping that their perfectly crafted baked good will win the coveted blue ribbon. It seems someone’s dessert is more deadly than tasty, though, when they discover an entire gaggle of bratty students have been poisoned during a press conference. It is clear that someone at the inn has a sweet tooth for murder. But who could the culprit be? The egotistical bake-off...