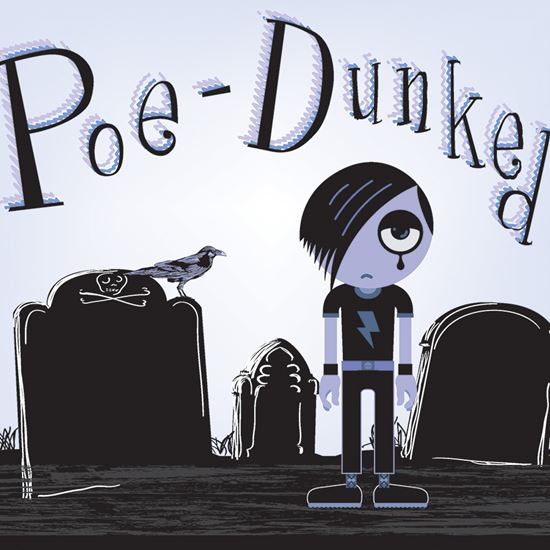 Twelve short scenes depict events in the life of Edgar Allan Poe -- or how his life might have been in today's world! Some of the more popular tales are represented: "The Tell-Tale Heart" is a police investigation; "The Cask of Amontillado" is a Jerry Springer-type TV show; and "The Masque of the Red Death" has a group of Hollywood types hiding out in a castle. In "The Fall of the House of Usher" Poe himself pitches the story to a producer for a horror film. Other scenes depict Poe as he might have been in elementary school; seeing a psychiatrist; trying to write "The Raven"; being rejected by a careless editor and working in a fast-food restaurant. This farce accurately reflects some of the events in Poe's tragic life, yet is fast-paced and wildly entertaining. About 30 minutes.

A.: A friend suggested I write a play based on "The Raven." "The Raven"? That's a poem full of brooding melancholy, regret and loss. And it doesn't have much of a plot. A guy is suffering from insomnia and a talking bird shows up ... in his house. What's the first thing that would come to one's mind in a situation like that? 1) How did a bird get in my house, and 2) How do I get the bird out of my house? The other scenes fell into place after that.

Q.: WHAT IS YOUR FAVORITE PART OR LINE IN THE PLAY? WHY?

A.: I like the "biographical" parts of the play: little Eddie as the weird kid in school, Poe running into Henry Wadsworth Longfellow in a Waffle House, Poe seeing a psychiatrist (who's crazier than he is), Poe trying to write while a raven flutters around his desk telling what to write, Poe being rejected by a careless editor, Poe watching television, and working at a fast food restaurant. Why? Because none of it is accurate!

Q.: TELL US ABOUT SOME OF THE CHARACTERS.

Q.: WHAT DID YOU HOPE TO ACHIEVE WITH THIS PLAY?

A.: I first encountered the tales of Poe in middle school. I couldn't believe they let us read stuff like this! Torture, murder, mayhem, mental illness! It just doesn't get any better! I hope students who are involved with this script will want to read the real Poe. He was a great writer. His tales are dark and menacing, and still influential today.

Q.: ANYTHING ELSE YOU'D LIKE TO SAY ABOUT THE PLAY?

A.: If you have nightmares and visits from talking birds, maybe you should seek professional help ... or write poetry and tales of terror.