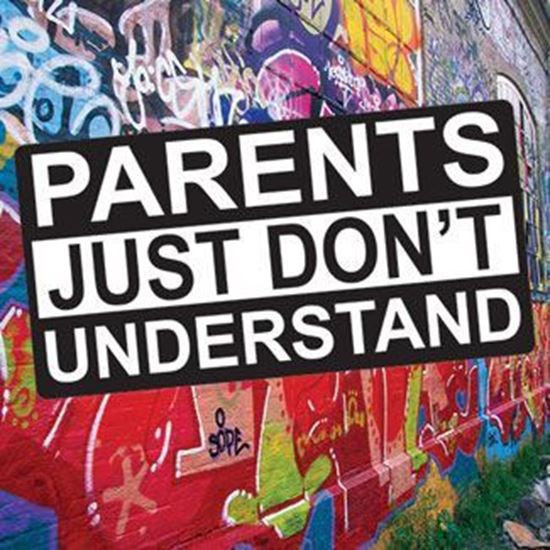 The hip-hop standard of the 1980s said it best: "There's no need to argue, parents just don't understand!" Here is a collection of hilarious (and often too close to the truth) scenes that all families are going to be able to relate to. This easy-to-stage comedy is a lighthearted look at a "greatest hit list" of classic family moments. Remember when Dad tried to teach you to drive? Or Mom decided that she would help pick out your wardrobe? How about those family vacations when you were stuck in the backseat for hours on end with your annoying sibling, headed for a camping trip in the middle of nowhere ... and then your precious iPod suddenly died. Using minimal sets and a very flexible cast, "Parents Just Don't Understand" will have your audience in stitches while also challenging your cast to not just play teenagers, but also adults. There's even a role for your drama teacher -- if he or she has the guts to play a biker dude! So stop reading this summary and stage this play!

A: I wrote this play because I grew up in a loving home, with two sisters (one older, one younger) and two parents who helped me through thick and thin. Many of these scenes come from my life. Not all, but many. I was a punk rocker in school, so the shopping scene is true. We went on car rides and drove our parents crazy. We dreaded receiving certain relatives' Christmas cards. As kids, we reluctantly visited elderly relatives. Of course, my dad and I tried to have "the talk." I find family to be very funny, because so many times we are making each other nuts but at the same time, we love each other. However, my family has never gone to the wrong funeral before. But hey, there's still time.

A: Probably when the dad and the son are having "the talk" and the dad refers to himself as "le tigre." This is not based on my dad, but I love when parents embarrass their kids. I'm 32, don't have any kids yet, but I'm sure I will probably be a lot like this father. I work with teenagers all day and they can totally relate with scenes like this. I just have an image of this father stalking the "prey" in his living room while the son wants to crawl in a hole

A: I watch a lot of TV, so I've seen many situational comedies that don't seem to ring true, especially the teenage characters. Too often a room of middle-aged people are trying to write dialogue for teens and it comes out sounding either like a stereotype or like a 40-year-old. I teach teens all day, so I hear how they really talk. One goal was to make the dialogue sound plausible. I made pretty stock characters, but even when scenes get a little zany, I really wanted to make the characters sound real. I believe that these scenes sound like real families that I know (heck, they often sound like my family). Sure, they're a little over the top put back to back, but imagine if when you were a kid you decided to compile the 10 or so most memorable, embarrassing, crazy times you had growing up? I imagine it would look something like this play.

A: I want everyone in the audience to relate. I love having students play parents, and students love to play adults because they don't think they'll ever actually be like their parents. Sorry to say, but that's not true. I am proud to say that I am quite a bit like my dad. At 15, that would have made me want to run away and hide. Now, I'm happy to be like him because he was (and is) a wonderful father. I think everyone in the audience can relate, because we all had conflicts with our parents or guardians, and for the adults watching the play, they will probably see themselves in both the teen roles and in the adult roles.

A: Enjoy! I have written about 20 plays in my 32 years, 5 sitcom pilots or spec scripts, and a screenplay. This honestly was the most fun I've had writing in the past decade. This play wrote itself because it is 80% autobiographical. (I'll let you guess exactly which 80%.) I hope it gets a great response because I have plenty more stories built up for a sequel. And yes, the title is in reference to the 1980s song by DJ Jazzy Jeff and the Fresh Prince. It was a song of my childhood.