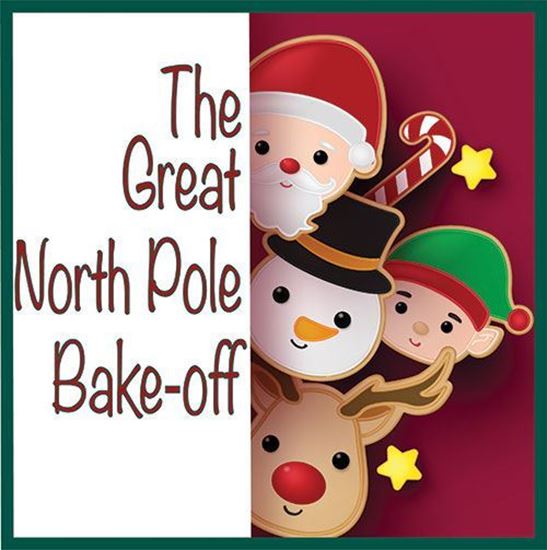 It’s the reality show of the season where inhabitants at the North Pole compete to create festive and fun holiday bakes! Hosted by cheery and comedic elves Merry Yuletide and Noel Joyeux, this week’s challenge is cookies inspired by Christmas carols. They will be judged by that merry old soul, Santa Claus, and the chill monarch, the Snow Queen. But grumpy workaholic elf Coal wants everyone to get back to work and not waste time with such trivialities as holiday baking. Will the other inhabitants of the North Pole be able to teach Coal the reason for the season?

Plenty of opportunities to add your own carols make "The Great North Pole Bake-off" a delicious and tuneful way to celebrate the holiday season. Large cast and gender flexible. Running time of 25-30 minutes will vary depending on length of music chosen.

My whole family are huge fans of “The Great British Bake Off.”  My mum is British, from Colchester, and we make a variety of traditional English desserts around the holidays, such as my favorite holiday dessert a classic English Christmas cake (a fruitcake with a layer of marzipan and frosting) and a steamed Christmas pudding (a steamed fruitcake that is set a light and served with custard).

I was inspired by the idea of  a competitive holiday baking show that was populated by familiar holiday characters, such as Santa’s reindeer and Jack Frost.

Baking around the holidays can be a lot of work, but is also a lot of fun.  Good food is a way that families, friends, and communities come together to relax and celebrate.  I wanted to create a show with a lot of laughs, a lot of heart, and a lot of scrumptious cookies.  A show for communities to celebrate the holidays together, both during and after the show.

Oh yeah, so probably the puns.  I’m a big pun person.  We have a tradition in my family of writing lots of  groan worthy puns in the cards that we send each other, for birthdays or holidays.  There was ample oppurtunity to sprinkle winter, baking, and holiday themed puns into the script. The character of  Jack Frost, being a winter sprite, particularly created the oppurtunity for plenty of “cool” puns, with lines like  “Ice,” to meet you!” or “ There is “snow,” place like home for the holidays,” etc.

I also enjoyed writing the character of the grouchy elf, Coal.  He’s a cantankerous contrast to the cheery and chipper elves hosting “The Great North Pole Bake Off,”  Merry and Noel.  I think his line, “Stop the mixers! Untie those aprons! Shove the sprinkles back on the shelf, elf! Nothing to see here folks! Show’s over! Oven’s off!” This would be a really fun moment to act out on stage.

The play incorporates classic Christmas characters such as Santa Claus, Santa’s reindeer, and Jack Frost.  I enjoyed creating the names and the distinct personalities for all of the elves, such as Coal, the curmudgeonly workaholic elf who is stage managing.

I aimed to create a festive and fun holiday show that was easy to direct and produce.  Folks are pretty busy around the holidays, so I wanted to write a  show that was low stress but really fun.  The show has a positive message about taking time to relax with family and friends without being didactic, which I like.   There are plenty of characters with big personalities and flexible casting.  If desired, there are opportunities to dance and sing, so every performer can shine and show off their talents.

I also liked the idea of having cookies involved in the production, in case theatres wanted to raise money for a cause or bring the community together to sample each other’s holiday baking.  Having cookies together afterwards is an oppurtunity for the community to come together and celebrate, like the characters in the play.  As the reindeer bring carrots with bells attached as their holiday dessert, you can even have “a reindeer platter,” with fruit and veggies, as a healthy option.

I hope your theatre troupe has as much fun staging “The Great North Pole Bake Off” as I had in writing it!