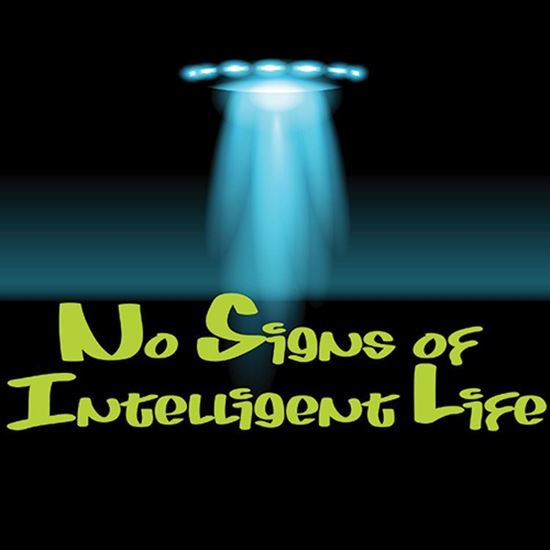 If you think you’ve suffered too many awkward moments or been in the dark in conversations, just think how poor, innocent aliens feel! Hungry to fit in, (a little too hungry at times!) they do and say things that we humans aren't allowed to. Join in the laughter as these extraterrestrials meet all kinds of humans -- teenagers, rednecks, survivalists and the most enigmatic, tech support nerds. Will these hapless aliens be able to figure out the daily rituals of dating, gossiping at the water cooler, camping, or even fixing our computers? The aliens have the knowledge to increase food production, create alternative energies, and achieve world peace. Are Earthlings the intelligent life they seek to bestow these gifts? More important, could Earthlings help the aliens get home again?!

“NO SIGNS OF INTELLIGENT LIFE”

A: I've always loved "fish out of water" stories. Oftentimes I've arrived late to a staff meeting where I have no idea what's going on, or find myself at a fundraiser where I'm the only young playwright among wealthy retired donors. In those awkward moments I observe the "culture" or "language" which fuels my writing. I try to build a story out of an unfamiliar situation.

I also buy a lot of goofy props and gimmicks for my own stage productions (heck, even for Christmas presents) and almost everything is made in another country. I can only imagine what a guy in Shenzhen, China must think in the factory as he's putting together yet another singing "Billy the Bass" or packaging a remote controlled fart speaker. Out of context, we consumers probably look very strange to him.

I think we all have had that feeling of being the outsider, sometimes not understanding what everyone else is talking about, and oftentimes new concepts or situations can feel very alien and unclear. This play is really a satire on some of the bizarre things that we do as humans and how what we think is normal behavior must look like to an outsider.

A: The first scene I wrote was the one at the water cooler. I luckily have never made the mistake of asking how many months pregnant a woman was only to find out that she's not actually pregnant. However, I did see a friend confront a stranger at a bar once because she was having a drink and appeared to my friend to be pregnant. The drink was thrown in his face before I even knew what he had said to the poor woman. Turns out she was just a little on the round side. It was one of the most uncomfortable moments of his life and at the time it was not funny, but I love uncomfortable comedy and later, this humiliating incident became one of our favorite stories. Sometimes the best thing to do in a really awkward situation is to be able to take a step back, confront what makes us uncomfortable, and find the humor in it.

Q: TELL US ABOUT THE CHARACTERS.

A: It's really all about the aliens. I tried to keep them as neutral as possible but while they have a sense of innocence they also have a sense of adventure. They all dive right in and are hungry to fit in, a little too hungry at times. They do and say things that we aren't allowed to. They ask "why" when the rest of us would just play along and pretend we "get it" when in fact we might be completely lost. In real life I wouldn't want everyone to act like the aliens in this play, but at times I wish I could be as upfront and honest as they are. The rest of the characters are for the most part exaggerations of humans, caricatures of teenagers, rednecks, survival guides. However, I do have to say that I was a substitute teacher for a year so if any of those jokes hit a little too close to home for those substitutes out there, I'm making fun of myself in that scene. I was 21 years old and suddenly I was in charge of an entire class and I had to ask myself, "How is this possible? Don't they know that I have no idea what I'm doing!?!"

A: We all play the alien at some point in our lives. A woman starts screaming at you at the gas station because she thinks she recognizes your car as the one that "cut her off a week ago." Or you just happen to be dressed exactly like the employees in the grocery store and as you are shopping an old man is insisting that you show him where the lima beans are. I hope that audiences will laugh and be able to relate with that feeling of being an outsider who has the best intentions of trying to fit in or settle a conflict but inevitably ends up failing miserably.

A: Have fun with the show. Practice is key. As I've directed more and more shows, I can't emphasize enough the importance of making sure your actors aren't reacting before it is their time to speak. This anticipation can really take the audience out of a scene, it feels "too rehearsed," and so I have been focusing more on the old cliché of "the illusion of the first time." The best advice I can give to other directors is to get the actors off book as soon as possible and then start to videotape each scene. Make them watch themselves in rehearsals and take notes on how they are acting when it is NOT their turn to speak. I've seen vast improvement in my actors after having them watch their own reactions even just a few times on tape.