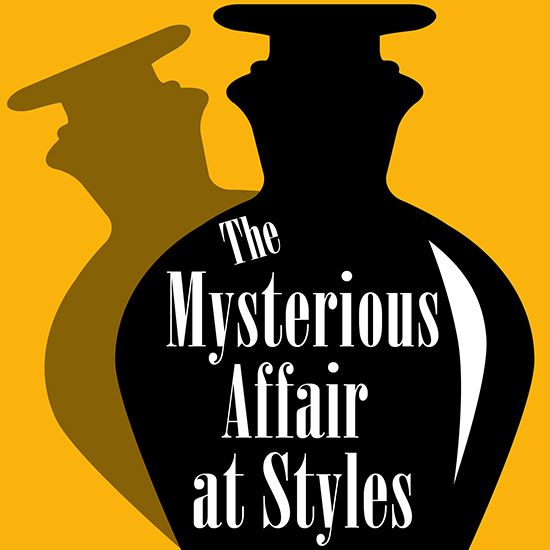 The Mysterious Affair at Styles

With the Great War raging on the Continent, philanthropist Emily Inglethorp helps resettle war refugees in the English countryside. Among them is Hercule Poirot, formerly of the Belgian police and Arthur Hastings, a wounded soldier on leave. When Mrs. Inglethorp is murdered, Poirot must use his “little grey cells” to unravel the motives of the enigmatic husband, the cash-strapped stepson, the poison expert, and the rest of the household, lest his benefactor’s killer escape justice. Poirot and Hastings join forces for their very first case in this new adaptation of Agatha Christie’s debut novel. This play is 90 minutes long.

THE MYSTERIOUS AFFAIR AT STYLES

A: I've always loved a good mystery, and I'm a huge fan of Agatha Christie's work. As both a novelist and playwright myself, the fact that she not only wrote both but adapted her own novels for the stage fascinates me. And she wasn't afraid to make changes. In fact, in one of her stage adaptations, she changed the identity of the murderer! I've written a few original mysteries for the stage, but Agatha Christie is still the "Queen of Crime." In writing this adaptation, I hope to both pay homage to her work and learn from it.

A: Just about any scene with Poirot and Hastings, really. There's a lot of humor in their relationship, and I had great fun playing with that. But one of my favorite moments is when Poirot instructs Hastings not to move, and Hastings takes him so literally he won't budge from the spot. Until he's torn between following Poirot's instructions and comforting Cynthia, which he does, only to decide it's an excellent moment to propose to a woman he just met (and that's in the novel, I didn't make that up!). This moment provided me with an opportunity to take what was on the page and add in an element of physical humor for the stage.

A: Adapting a novel for the stage almost always means cutting some elements and rearranging others. Agatha Christie's plots are very intricate, and so before I could cut anything, I had to know for certain what would become important later. Also, because times are so important in a mystery, I had to be very careful when rearranging elements. Sometimes a rearrangement would make sense dramatically but wouldn't work for the plot. There are so many things going on in this story; it was a lot to keep track of! Another challenge was keeping the voices of the characters consistent with the words Christie wrote. Hopefully, future audiences won't be able to tell the difference between a line from the novel and a line I wrote to fill in the gaps.

A: I knew right away I wanted to write this play in the style of a traditional drawing room mystery, the kind Agatha Christie herself made famous. While additional locations are present in the novel, the action is centered on Styles, and so I found the story naturally lent itself to a single set. Also, I wanted to be as faithful as I could to the original story while still making the changes necessary for this to be a play rather than a book on stage. I believe my job here was to be invisible as possible, so audiences will have the feeling of watching an Agatha Christie original.

A: 2020 will be the 100th anniversary of the publication of the original novel—Agatha Christie's first. Her mastery of plot and character, however, are already clear in her early novels. I love the twist at the end of STYLES. It feels obvious in hindsight, and yet we don't see it coming. (DEATH ON THE NILE contains one of my other favorite twists.) A hundred years on and Christie's work is as popular as ever. I don't think her novels are going anywhere anytime soon, and I'm proud to add my own small contribution to her legacy.