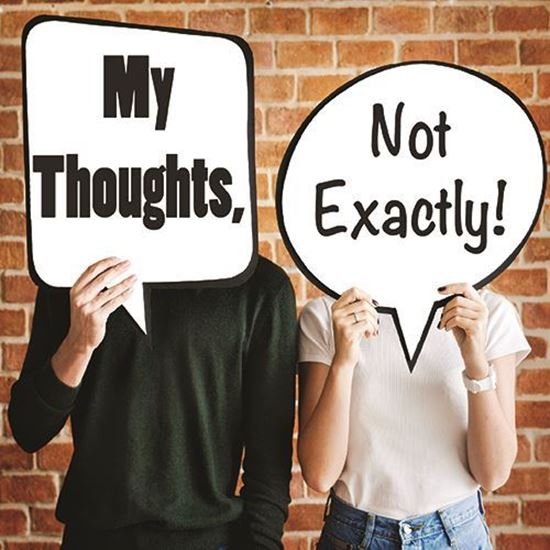 My Thoughts, Not Exactly!

Have you ever asked yourself, “What was I thinking?” Well, Spencer and Olivia are doing just that – while on their first date!  Their conscious minds (played by two separate actors) are present on stage, sharing their thoughts (often contradictory thoughts!) on the conversation. Things get off to a rocky start, the usual awkward silences ensue, but the complications really begin when both their exes show up. Furthermore, Olivia produces her checklist of grueling questions for Spencer to test whether he is “boyfriend material.” The date concludes with Olivia meeting Spencer’s parents, even though it is just a first date!   This show offers a lot of laughs and opportunities for physical humor. About 45 minutes.

Playwright Kory Howard talks about his play “My thoughts, Not Exactly!”

What's your favorite part or line in the play? Why?

I really love the interaction between the characters and their consciences.  What they're thinking is not always in agreement to what they are saying and vice-versa, so I love the consciences' reactions to the more embarrassing moments, like when Olivia is describing Spencer's eyes as poop brown, or when Spencer is describing, in disturbingly romantic detail, Hugh Jackman.

Honestly, who hasn't had moments like Spencer and Olivia?  These characters aren't necessarily based on real people, but real people can see themselves in these characters.  Personally, I have used a coupon on a date.  I took a girl out when I was a teenager, and we went to the movies.  My friend had given me a free-movie pass a few weeks before, and I used it on our date.  Not very impressive!  We also had many awkward conversations.  Actually, it is more accurate to say that we had almost no conversation - I was a very awkward teenager!

What did you try and achieve with this play?

I wanted to create a funny story that shows how our minds are not always on the same page as what we say. Sometimes I wish I knew what people were thinking.  But then again, after writing this play, I'm not so sure I would want to know other people's thoughts!

Good luck to anyone that experiences an awkward first date.  You are not alone!  Just be yourself and don't overthink it!