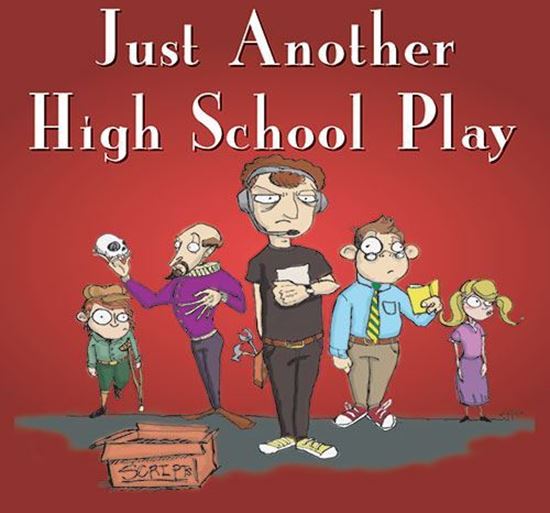 Here's a comedy that covers nearly every angle of the typical high school play with a dose of history and improvisation thrown in for good measure! A group of actors, who have apparently been abandoned by their drama teacher, have to fend for themselves opening night in front of a live audience. Their teacher has left them hanging because no one has been showing up to rehearsals and no one is really quite sure what they are supposed to do. The student assistant director and the stage manager step in, find a box of scripts which they pass out to the cast, and try to throw something together. What follows is a rollicking show full of physical comedy, gags, and satirical re-writings of many plays from Shakespeare to Albee. The next time your high school wants to do a play, do them all...in under 90 minutes! This play offers opportunities for audience participation, plus it includes a part for your drama teacher.

A.: Nightmares, actually. As a director I have woken up many nights in a cold sweat after dreaming that a play of mine has opened, the theatre is sold out, and I still don't know which show we are putting on. The audience riots, I'm running for my life in my underwear (don't ask why because I don't know), and suddenly I'm saved by Mickey Rooney flying a Goodyear Blimp. I had the idea for this show during my first year teaching full time at my old high school. My former drama teacher Jon Turner was retiring. He was an institution, a former drill sergeant and Vietnam veteran who had been teaching for 29 years, so I wrote the show as a farewell gift to him. We ran it for one night only with 500 people packed into a 370 seat auditorium. Having him come out at the end and lead the audience in his mantra "Be Loud! Be Seen! Be Great! Drama Forever!" was a truly great moment in my early teaching career.

A.: I need to grow up, but probably the bit about not being able to put on "Urinetown" because the actor already went during intermission. What can I say I am a twelve-year-old trapped in a man's body.

A.: Many of the actors' names are names of my former students. While writing the first draft of the improvisation skit, I had used generic names for all of the characters: "Actor 1", "Actress 1", "Actor 2", and so on. I just wasn't getting any real punch or life out of the lines, so I started using the names of my favorite students and suddenly I was able to hear their voices. The original stage manager and assistant director parts were written specifically with two actors in mind. One was always acting like a know-it-all backstage and the other acted like a big loveable oaf, so I owe a lot to the both of them.

A.: I wanted to write about my entire experience in high school theatre (both as a student and now as a director) and allow the audience in on all the little backstage jokes about melodramas, the fears and apprehensions all actors have to face, as well as the real "drama" in drama that is always going on within the cast and crew.

A.: Play it loose. I directed this show at the same time as I was directing a student production of "A Streetcar Named Desire" and it was my time everyday to just have fun. As a unified cast we created this play and it came from our own experiences in the theatre, so that when it went up for that one night to a packed house, the actors were free to just play themselves. Of the twenty plays I have directed in the past five years, this rates up there as one of the most enjoyable experiences from start to finish