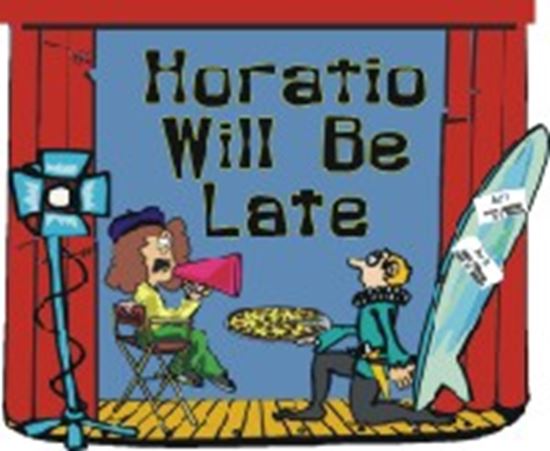 Horatio Will Be Late

Miss Duncan, the Stratford High School drama teacher, has always wanted to direct "Hamlet," but from the very start her production is doomed. The lead actor is a prima dona who exasperates his peers. The other actors are either jealous that they weren't cast in different roles, or clueless. On opening night the costumes still haven't arrived, the makeup is lost, and the actor who is to play Horatio calls from the hospital just before his emergency appendectomy. A member of the cast has a cousin who is a professional actor who recently performed in "Hamlet." When he arrives, Miss Duncan learns, much to her horror, that the actor played the role of Hamlet, not Horatio. When cue cards are suggested, they discover their professional actor is dyslexic and can't read them. Chaos reigns as actors upstage each other, mis-cue each other, and finally end up in a big fight. Add a nosy principal, a visitor from an arts conservatory, and the pressure of trying to fulfill the terms of a state grant, and we have the worst, and the funniest, production ever of Shakespeare's great tragedy.

"HORATIO WILL BE LATE"

A: A love of Shakespeare, a love of directing, and all of the anxiety dreams that go with directing. I've never had a production go as wrong as this one goes, but I'm always afraid there will be a first time.

A: Each time the poor director thinks she has the problem solved, something new arises. I love the part where she thinks she's getting a professional actor to play Horatio. When the actor arrives he knows the role of Hamlet, not Horatio. When cue cards are suggested they find out he's dyslexic, and can't read them. I love the Frankenstein mask being substituted for Yorick's skull, and the costumes from "Grease" and "South Pacific" replacing the Elizabethan costumes that were rented but never arrived. Most of all, I like the "To be or not to be ..." speech being delivered by two actors desperately trying to upstage each other. Many writers, including Mel Brooks, have satirized this famous speech. This was my chance.

A: The characters are entirely made up, although we've all encountered people like them: actors who think they deserve better roles, prima donnas, the truly talented as well as the truly clueless.

A: "Hamlet" is an incredible play. It's Shakespeare's longest play, and possibly the most challenging to bring to the stage. I hope that actors and audiences will want to learn more about it, and other great Elizabethan dramas. I also hope that actors and audiences who experience "Horatio Will Be Late" will have a lot of fun. And for directors who worry about everything that can go wrong in a production, here's what happens when it does.

A: You may notice that the names of the principal and the director, Duncan and Quince, are from other Shakespeare plays. Have fun with Horatio. In the words of Principal Quince, "Go break legs, or whatever it is you actor people do to each other."