Jeffery Goodson (pictured left) is a transplanted Floridian living in Minneapolis, Minnesota for the last couple of decades. He has worked in theater as an actor, singer, musician and writer the whole time. Writing for the stage started while earning a theater degree from Shorter College in Rome, Georgia and continued at various venues including a 3 year stint in Minneapolis as part of the performance/writing company at Dudley Riggs’ Brave New Workshop and original works for various summer-stock companies. "Shakespeare Ate My Brain" (co-written with Barry Shay) is his first published play. 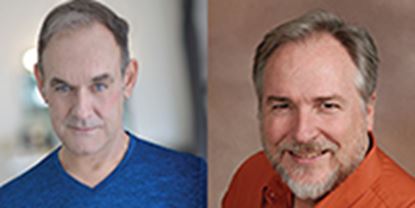 Comedy by Goodson And Shay


Inevitably, community theatres are destined to have Shakespeare and zombies. This comedy has both! Dr. Marlowe-Thomas, an aspiring new director, is desperate to stage the ultimate Shakespearean production of the "Scottish Play." She is convinced Shakespeare originally wrote his plays to be performed by a cast of actors that included zombies. To that end, she is auditioning Ian, a struggling young actor, using an original manuscript of “Macbeth.” Before they realize it, two actual zombie actors (Rick Burbage and Eddie Booth, both based on historically renowned...