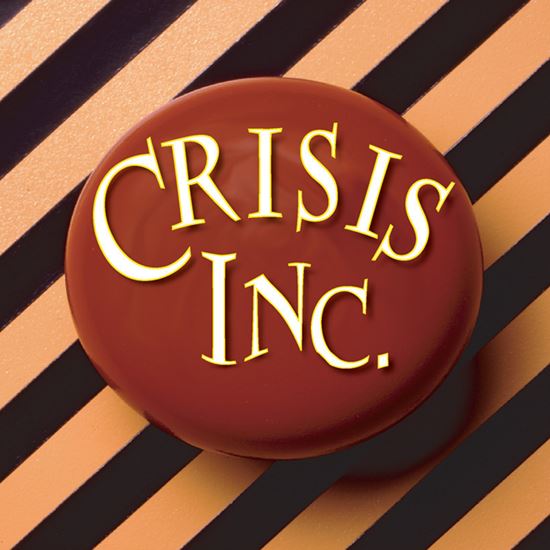 Wait—start worrying! No wait—don’t worry. Let Crisis, Inc. worry for you. This farce takes place in the lobby of a business which provides the service of panicking for people. When you have a panic situation and you can’t focus on what to do next, you hire Crisis Inc. to do the panicking so you can move along and get your work done. Two business people come to the company's office – and each of them responsible for the other's crisis situation. Realizing the potential for fireworks should the two meet, the receptionist tries hard to keep them apart. Classic farce devices, such as multiple door slams, quick entrances and exits, and high energy from the employees who panic on cue, keep the humor rolling. Approximate running time: 30 minutes.

A: I knew I was going to be directing a one act for competition for a local high school and since the students really wanted to do a comedy, I thought I should write a farce mistaken identity, quick exits and entrances, in and out of doors, unlikely situations, physical humor, deliberate nonsense, and innuendo. While there's no actual chase scene, I think that the appearance on-stage of a dozen or more employees yelling and screaming in panic, serves the purpose of a chase (humorous pandemonium).

A: I actually REALLY like all the characters. The performer in me would love to tackle any of these parts, to find the humor in them. If you twisted my arm, I might say that I am most proud of Belinda Taggert. When I held the auditions for the play, I had three young ladies that I was seriously considering for the parts of "Lila" and "Jenny." The trouble was, whichever one I didn't cast there, had no other part. I hated the idea of such a talented performer not getting a part. It hit me then...this was my play and I could do what I wanted. I had a rough beginning that I knew needed to be worked out, so I created the role of Belinda for my performer, and it helped me establish what Crisis Inc. was and what the company did. And of course, Belinda's exit always got one of the biggest laughs of the entire show.

A: These characters are not consciously based on anyone I know, including myself. When I write for theatre, I have to be able to visualize all the movements and hear the lines spoken, and will often sit at my desk, speaking out loud to try to get the speech patterns right for each character, but I still don't think I'm there...not entirely, anyway. I think it would be hard to write a part that I couldn't identify with, in some way.

For this play, I tried to imagine characters that would be good for the situation. I like to create as much conflict in as many places as I can. The character of Tracey, for instance. Her very character is conflicted...one of the best panickers of the company, yet when she's not in panic mode, is the slowest moving person there. Lila, the central figure of the office around which all the action revolves, has the job of keeping order in an office of pandemonium. Every time Ted appears, there is conflict (and humor) because he is never talking to the person to whom he appears to be talking to. So, the characters came out of a need to create a situation, more than anything else.

A: I wanted to create something fun and entertaining.

A: As a writer, director, and occasionally a performer, I think that even in a situation as totally absurd and farcical as "Crisis, Inc.," it is much more interesting, and funny, if the characters are real. Personally, I think that 'characters' are funnier than 'caricatures.'