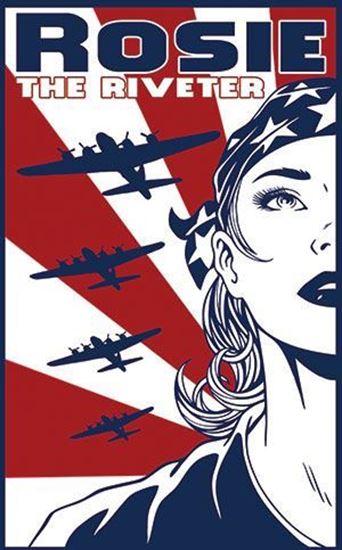 It’s January 1942, in the throes of World War II. Eddie, the owner of Eddie’s Auto Parts Factory in Cook County, Illinois, is struggling now that there is a freeze on the manufacturing of car parts. His secretary, Rosie, wonders if the factory can secure a government contract and be converted to make airplane parts instead— if only they can find the manpower. At a time when the radio and the mail were the main sources of information, and ration books were in every household, Rosie is willing to shed tradition, roll up her sleeves and do her part. She is chosen to become the iconic image that will inspire so many women workers to join the cause. Full evening.

Also see the one-act version of this show.

Working with mainly high school productions for the past 14 years, I kept running into the problem of a disproportionate amount of female talent and interest compared to male interest. After using every trick in the book, from adaptations to gender swapping, I decided to write my own production that could highlight the talent of my female performers. The image of Rosie’s “We Can Do It” poster has always been a strong female symbol, so I was drawn to it as my inspiration for this play.

What's your favorite part or line in the play? Why?

My favorite part is the opening of Act 2. The letter writing scene can be beautiful. I read so many actual letters of the day in order to capture the themes through lines of the scene. When all the voices are popping around and coming in and out of unison, it makes for an interesting and poignant theatrical moment.

Tell us a little about the characters.

The characters are all fictitious but are a conglomeration of real women from the day. My research allowed me to read many different letters, journals, and interview transcripts, and I wanted to try to capture the essence of women of the day.

I wanted to create a strong storytelling piece that focused on female actors and that shines a light on the historical moments and sacrifices of the Americans during WW2.