Rebecca Frohling has, at various times, been an adorable child, a whiny teenager, an overwhelmed student, a happy wife, an overwhelmed but also happy mother- sometimes all these things within the same day. In 1997, she attended Full Sail Center for the Recording Arts and obtained her film degree- which totally explains why she now works in an office. While at film school, her script, The Death of Joe Keenan, was chosen for the class final film project. Not so interested in writing at the time, her writing might have died too had she not been inspired by a chance circumstance to write The Family Fruitcake in 2009. This experience flipped the long dormant switch, and made her realize who she is (on top of everything listed previously): a writer. Following Fruitcake, she promptly penned a massive epic web radio series (like you do) entitled The Threads of Time- new episodes monthly! Who knows what she will write next? Certainly not Rebecca. But one thing she does know: she's more than ready to find out. Bring on the next adventure! 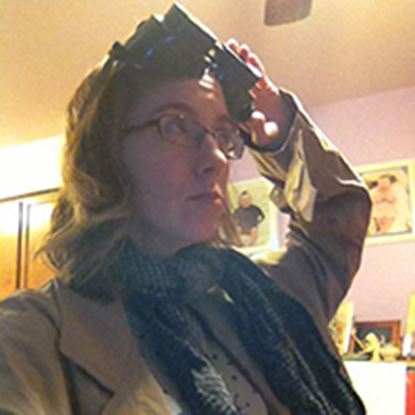 
Laurie McKinnon is determined that everyone should have a normal Christmas, especially while the eldest son is away serving in the military. She rushes about making sure everything is ready for the impending arrival of the extended family, although her husband, Jim, and teenage daughter, Kelsey, are unconvinced of the need to impress everyone. Meanwhile, youngest daughter Emma arrives downstairs in full camouflage makeup. Her mother is less than enthused. Visitors soon trickle in. Laurie’s very pregnant sister with her husband, who gets lost easily; Jim’s bro...