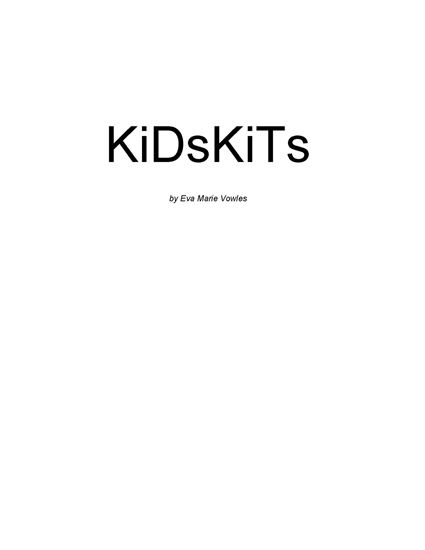 Welcome to “Kidskits,” a collection of ten humorous skits for stage or classroom. The short, reproducible skits can be put together with a limited number of rehearsals and require little in the way of props, costumes, lighting or sound. To avoid the problem of memorizing lines, students may hold their scripts for most performances. A touch of melodrama can only enhance the scripts’ inherent silliness. Suitable for children of various ages and reading ability, including classes of emotionally and/or physically challenged students. Skits include:

THE THREE LITTLE PIGS (OR WERE THEY BEARS?) The narrator is not quite sure, and unfortunately he’s telling the story, complete with dragons, evil step-sisters and some confusion about just who built the house of straw. Running Time: 7 minutes. Ages: 6+ OF DAMSELS AND DRAGONS Poor Princess Freddy! She sets off to visit her very best friend in the whole world, Princess Bob, and meets up with a weird wizard, a dreadful dragon and a less-than-coordinated knight. Add to that a narrator who must work through tormenting tongue-twisters and let the laughs begin. Running Time: 12 minutes. Ages: 8+

THE LORD’S PRAYER You’re saying your bedtime prayers and someone answers. Someone with a sense of humor. Running Time: 6 minutes. Ages: 9+

STORYBOOK NEWS: LITTLE BO PEEP Peter Piper tries to bring you the story of a poor little girl who has lost her sheep and doesn’t know where to find them, but, as Peep points out, if she knew where to find them, they wouldn’t be lost. Peter asks the questions, Peep provides the answers, and neither one is what the audience expects. Running Time: 6 minutes. Ages: 8+

CAPTAIN ENVIRONMENT Captain Environment is here to save the world from...well, he isn’t sure. But with the help of an environmentally aware litterer, he may just save the planet after all. Running Time: 9 minutes. Ages: 9+

THIS IS YOUR LIFE, JACK VINE This is your life, Jack Vine! (as in Jack and the Beanstalk). Jack however, doesn’t know his own mother, his cow, or the giant. Why? Turns out Jack has the flu. So, who’s filling in? Running Time: 10 minutes. Ages: 9+

THE NEWN KNEWS The evening news was never like this! Join two anchors with the brains of one, a sportscaster who has all the facts mixed up, Wendy, the windy weather girl and Dottie Knot with her on-the-spot-report (except that she can’t find the spot). Running Time: 10 minutes. Ages: 10+

RETURN OF THE DRAGON In order to win the hand and heart of the princess, the knight must defeat the dragon living in yonder fields. The problem? The knight lacks courage, coordination and is a little lacking in the brains department. Will he win? Does the princess want him to? Running Time: 25 minutes. Ages: 10+

MYSTERIES SHOULD BE UNPREDICTABLE The characters in this murder/mystery try desperately to act out the story as the author writes it. If only he would quit making changes. The author is confused, the crew is frustrated, and the result is hilarious. Running Time: 30 minutes. Ages: 10+

GOD AND THE DIRECTOR A study in technical comedy. Those that have worked backstage, with or without difficult directors, will find familiar humor in this short comedy for groups with the advantage of technical effects. Running Time: 6 minutes. Ages: 11+