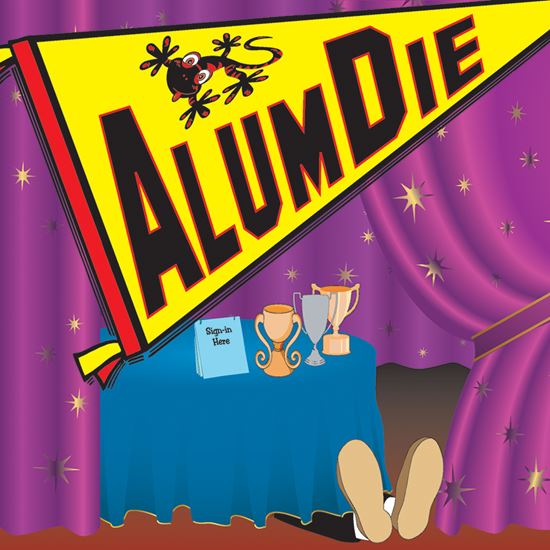 Here is a fast and funny interactive murder mystery! It takes place at a 20-year college reunion where the guest of honor, Professor Perkins, turns up dead before he has time to accept his award. Several of the alumni decide to search for the murderer on their own. That way they’ll look like heroes and the school will be saved the embarrassment and humiliation of a long, public investigation. It’s their duty as alumni. (Well, that and to donate, of course.) Among the mourners--and suspects--are the professor’s life-long assistant Blaine, the school janitor, and the wife of an alumnus who is always professionally rated behind the professor. “AlumDie” invites the entire audience to get into the spirit of the class reunion in a number of ways as long as they are careful about not offending anyone. If Professor Perkins isn’t safe, who is?

A: It started with a marathon game of Clue. We started to talk about what each person would be like if they were in the actual situation the game presented. A few days later I was thinking about this again and that became the springboard for playing with a situation where there is a huge disconnect between the reactions that we would hope we’d have versus the reactions that we actually have.

A: Each character is completely fictional but they do have, I believe, these relatable traits (although rather heightened) that allows an audience to have some way of making a connection with them. I also tried to populate the play with these archetypes from high school whose traits were expanded out over the years.

A: Just that the play is pretty broad and accessible. It’s got a range of comedy styles from little physical bits to more concentrated quips. It’s interactive in the way that it makes the audience not just a part of the environment but part of the narrative as well.